Birla Institute of Technology and Science Pilani, established in 1964, is one of the most esteemed engineering institutes in the country and is ranked 3rd among all engineering colleges, and 1st among private engineering colleges. The university’s second campus, KK Birla Goa campus was started in 2004 and since has laid a firm foundation for the promising future of the university. BITS conducts an entrance exam, called BITSAT, for offering admission to deserving candidates on basis of merit.

This post addresses the following issues concerning the CGPA Trends of students of BITS Goa, from various branches and courses with respect to some other parameters.

–The first graph concerns with the average CGPA of the whole batches from 2004 to 2016 with the cutoff scores of BITSAT test for Computer Science branch. In this paper, we try to gain an insight on how the average CGPA of a batch moves with the rising cutoff of BITSAT. We then try to explain the interesting outcome of the Hypothesis testing.

This analysis gives important insights into the sincerity of students along with the leniency of teachers in different branches.

H1: The average CGPA of a batch with higher cutoff scores is higher than that of lower cutoff ones.

The data used in this capstone project was acquired from local IntraNet file sharing system of BITS Goa, on which it was freely available to use and share. The raw data was very diffused and had to be cleaned and sorted to get useful pieces of information. We used Microsoft Excel for this job, along with R.

The fields we get from data are:-
● Name
● ID number
● CGPA until January 2017 / passing out.
Note that the information that can be extracted from ID Number of a BITSIAN is:-
1. Year of admission
2. Engineering Branch and Science stream(for dual degree students)
3. Campus rank with BITSAT score as the benchmark.
4. Whether a student has opted for Practice School(Internship) or Thesis.

The number of entries for the data about 7,500 students; which we thought was big enough for a good project. 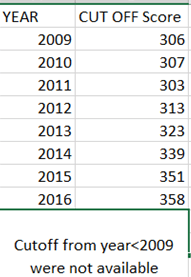 It can be clearly seen that despite rising cutoff’s, the average CGPA of batches is declining. (Possible Conclusion : level of BITSAT is getting easier every year)

All branches have shown constant decline except B4(Physics), which has lately seen a rise in average CGPA.

It shows that if your BITSAT rank is better, You are likely to perform better than others. Since the slope is negative we can say that people with higher BITSAT scores generally score more CGPA because ID Number directly depends on BITSAT Rank and thus BITSAT Score.